VOLTA A CATALUNYA: HODEG MAKES IT TWO IN A ROW

Three days from his Handzame Classic success, the Colombian became the first neo-pro to take a World Tour win this season.

Alvaro Hodeg is on fire! Brimming with confidence after nailing his first pro victory at the Handzame Classic last week, the 21-year-old made it into the spotlight once again, this time at the Volta a Catalunya, the fourth oldest stage race in the world, where Quick-Step Floors’ sprinter took an undisputed victory in Calella, where he became the first Colombian rider in five years to put his name on the winner’s list at the Spanish event.

The 152.4km loop around Calella was animated by a six-man breakaway who took off after the start and got caught on the first slopes of Port de Collsacreu, a third-category climb averaging 4.7% over three kilometers which didn’t do any damage in the peloton, despite an attack of Wilmar Paredes (Manzana Postobon), who was easily reeled in by an unforgiving pack.

Quick-Step Floors moved to the front with two kilometers to go, on a short downhill section, where Luxembourg Champion Bob Jungels ramped up the speed to 65 km/h and stretched the field before peeling off with 800 meters left, when Michael Mørkøv took over and expertly delivered Alvaro Hodeg, who put three bike lengths into runner-up Sam Bennett (Bora-hansgrohe) and nabbed a superb victory, which moved him into the leader’s jersey at the Volta a Catalunya.

The fourth Colombian rider in history to top the general classification at the Spanish race and the first neo-pro to grab a World Tour win this season, Hodeg praised his teammates for their flawless job on Monday afternoon: “The entire team stayed with me and protected me today. On the descent, I was somewhere in the middle of the bunch, but Michael gave me a lot of confidence by telling me to stay calm and pacing me back to the front, where Bob showed an insane power in the last kilometers. Many teams wanted to be there, but thanks to these fantastic guys we were all the time in control, they made the difference today and I thank them for that.” 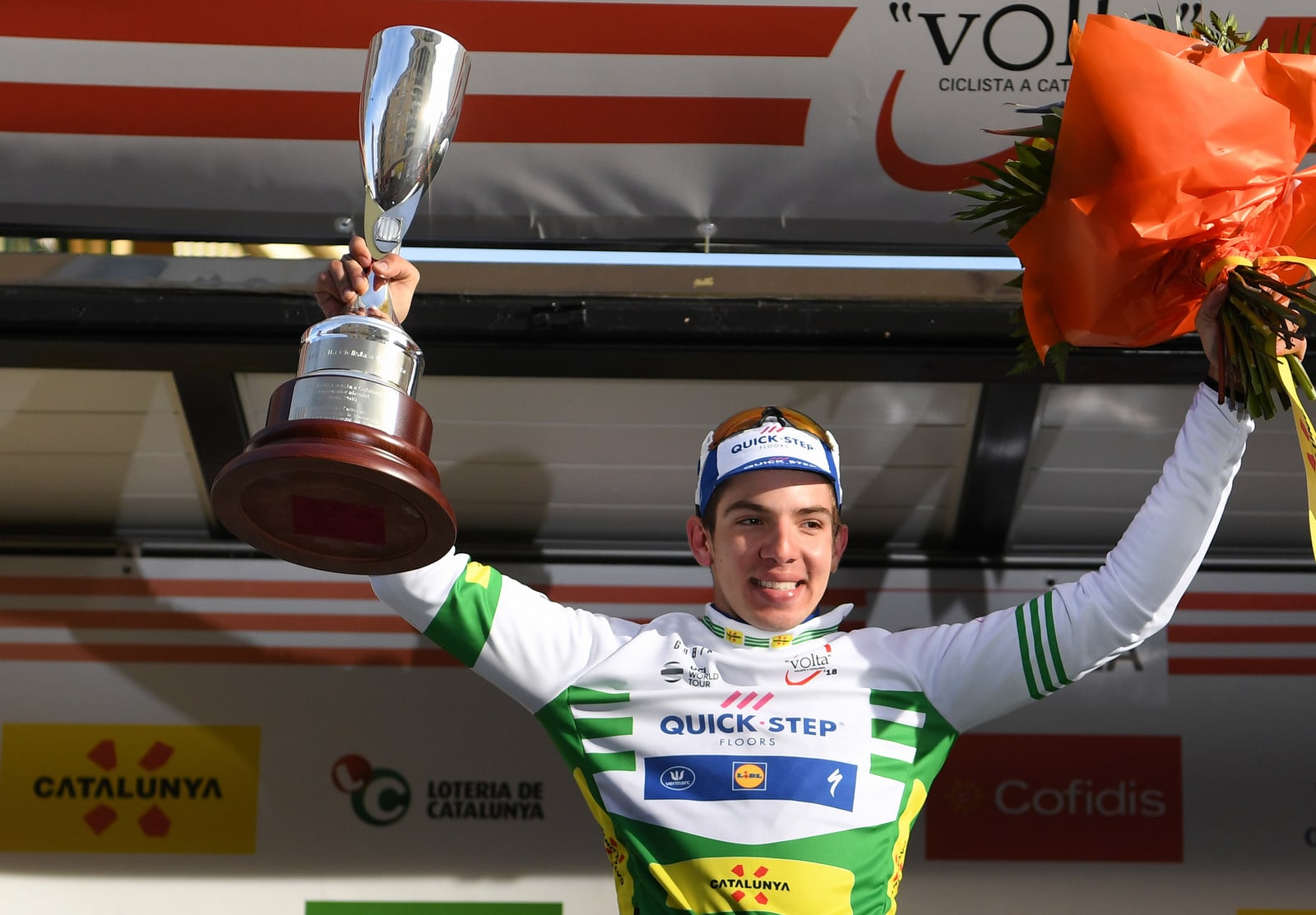 “It’s a dream come true! Last week I was celebrating my first pro victory, and now I won a World Tour race against many big and more experienced riders. It is really crazy when you think of it. I was strong today and wanted to get the win for this amazing team who had faith in me. The leader’s jersey is a bonus, one which makes me very proud. It’s just the beginning of the week and hopefully other good results will soon come for the Wolfpack”, concluded Alvaro, the first 21-year-old rider in more than 20 months to take a win at World Tour level.

Sports director Geert Van Bondt, who followed the team from the car, together with Brian Holm, had the lowdown at the end of the day.

“We had a plan and executed it perfectly. We knew from last Friday that Alvaro would have a good shot today. When we gave him the chance on Friday it was to see how he would handle the pressure. Of course, the World Tour is something different and he is only 21 years old and a neo-pro, which makes this victory even more impressive! Today, the whole team was around him and we made a very strong lead-out. He was struggling a bit on the climb but Michael waited for him and in the bottom of the descent the rest of the team lined up around him and brought Alvaro to a perfect position for the final. Max and Bob really split the peloton riding with 60-65 km/h, and when Alvaro took off from Michael’s wheel nobody could follow and made it look easy.”