A tactical masterpiece of Quick-Step Floors concluded with a memorable victory of the Dutchman, who was followed on the podium by teammate Philippe Gilbert.

Quick-Step Floors’ amazing streak in Belgium continued on Friday afternoon, when Niki Terpstra soloed to victory in the prestigious E3 Harelbeke, adding a new trophy to the team’s cabinet in this season’s one-day races, after the ones of Le Samyn, Dwars door West-Vlaanderen, Nokere Koerse, Handzame Classic and Driedaagse. It was a well-deserved and hard-earned win, which came on the back of a brilliant and flawless team strategy, doubled by an amazing strength in depth.

The first key moment of the race surfaced with 110 kilometers to go, when a big crash in the peloton split the field, leaving 30 riders in the front, including the entire Quick-Step Floors squad. Tim Declercq and Iljo Keisse put down the hammer, trading ferocious pulls as they increased the advantage over the chasers to over a minute and brought the gap to the breakaway down to two minutes. On the iconic Taaienberg, a 650m climb on which many of Quick-Step Floors’ previous wins were forged in the past decade, our team put the race in the gutter and forced a massive selection.

Just before the top of the climb, Yves Lampaert and Niki Terpstra powered clear from the group, looked over their shoulders and saw their teammates slowed down the chase of the opponents, which gave them a boost to push on and build a 20-second gap, catching the last two escapees, Damien Gaudin (Direct Energie) and Pim Ligthart (Roompot), in the process. Lampaert, the reigning Dwars door Vlaanderen champion, buried himself for Terpstra at the front and took the gap to almost a minute, as behind Philippe Gilbert and Zdenek Stybar marked the moves of Peter Sagan (bora-hansgrohe) and Greg Van Avermaet (BMC).

On the narrow and twisty roads of Flanders, Yves and Niki – both former World TTT Champions – soldiered on and left every hurdle behind, be it the Stationsberg, the Paterberg or the Oude Kwaremont, the longest hill of the race. It was after the latter that a regrouping took place, when a large group caught the chasers, but the Quick-Step Floors duo remained cool as a cucumber and continued to fight hard, until with 23 kilometers to go, when the admirable Lampaert ran out of steam, just before the slopes of Tiegemberg.

Terpstra – who earlier this season soloed to a convincing victory at Le Samyn, where Quick-Step Floors’ strength in numbers again made the difference – still held 30 seconds over the top of the hill as he made use of his time trial skills to pace himself, but the advantage began to drop inside the last ten kilometers, on the long straight roads to Harelbeke, where the chasers made visual contact with him.

As a result, several attacks shaved off half of the deficit, but once again, Philippe Gilbert and Zdenek Stybar played their role to perfection, tracking down every single acceleration, hindering the chasers’ effort and ensuring Niki’s gap didn’t dip below 15 seconds and was still a hefty one in the closing kilometers. 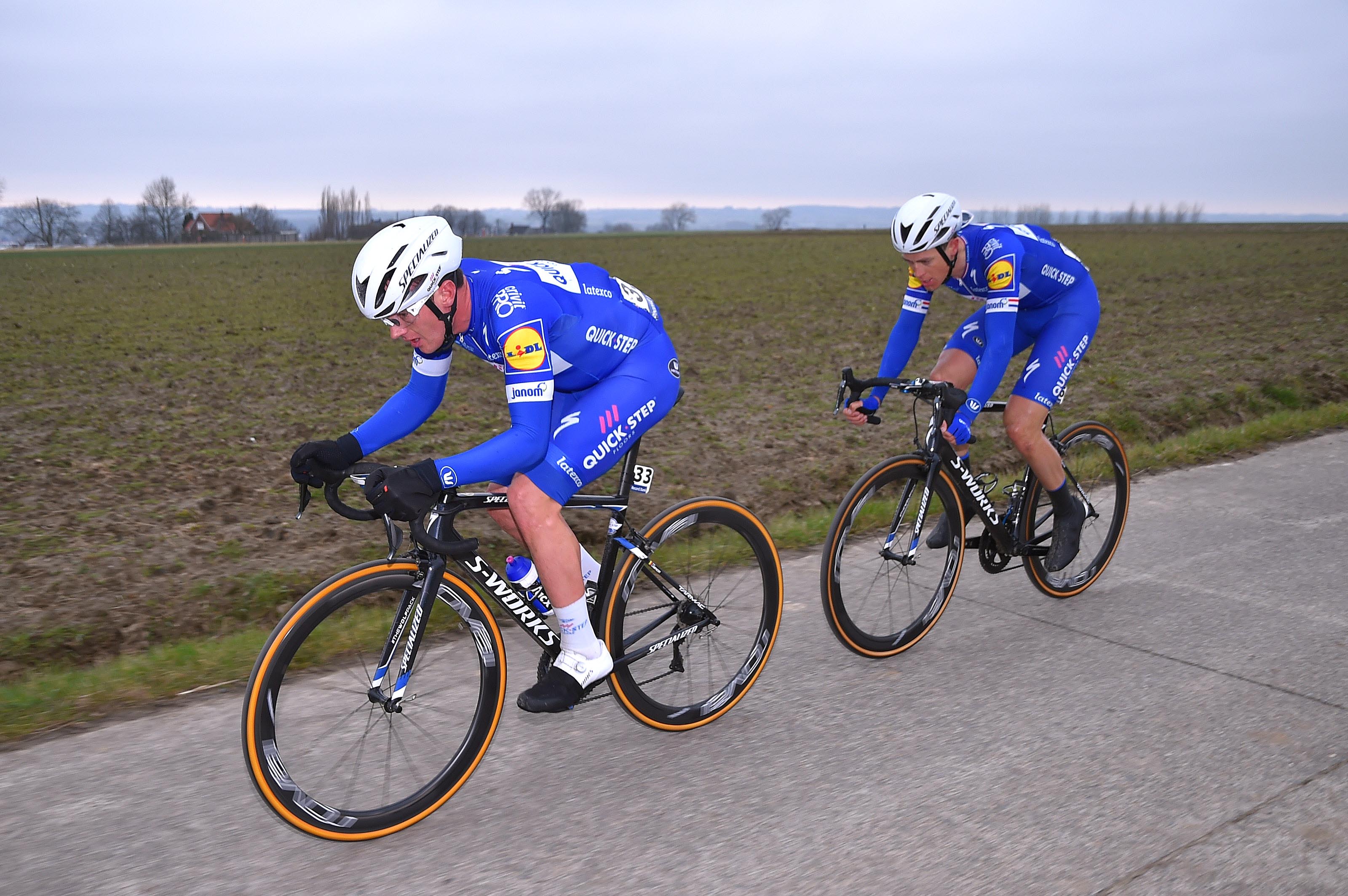 Completely drained, but with his arms high in the air, Terpstra arrived at the finish, where he celebrated Quick-Step Floors’ 33rd victory in a cobbled classic and cementing his reputation as one of the best one-day riders of his generation. Philippe Gilbert made it a spectacular 1-2 for the team, as he easily sprinted from the ten-man group, while Zdenek Stybar concluded in ninth place, capping off one of the best team displays seen in the last years.

“This is one of the biggest wins of my career and the fact that it came in such an important race gives me even more pleasure. It wouldn’t have been possible without this awesome team, the way they all rode today – from Tim and Iljo who spent a ridiculous amount of energy at the front of the bunch and Philippe, Florian and Zdenek who reeled in every move to Yves’ fantastic effort – this was a perfect display of the Wolfpack spirit”, said Niki after becoming the first Dutchman in 15 years to nail the victory in E3 Harelbeke.

“I was disappointed after last year, when I came out of the season winless, but the hard work in the winter paid off today and now I’m very happy. The success in Le Samyn gave me a lot of confidence and showed me I’m on the right track. Many thought we were crazy to attack 74 kilometers out, but we knew we could make something special today. The toughest moment came on the highway, inside the last ten kilometers, but I didn’t crack and rode my heart out there, managing to finish off the team’s brilliant effort with this win.” 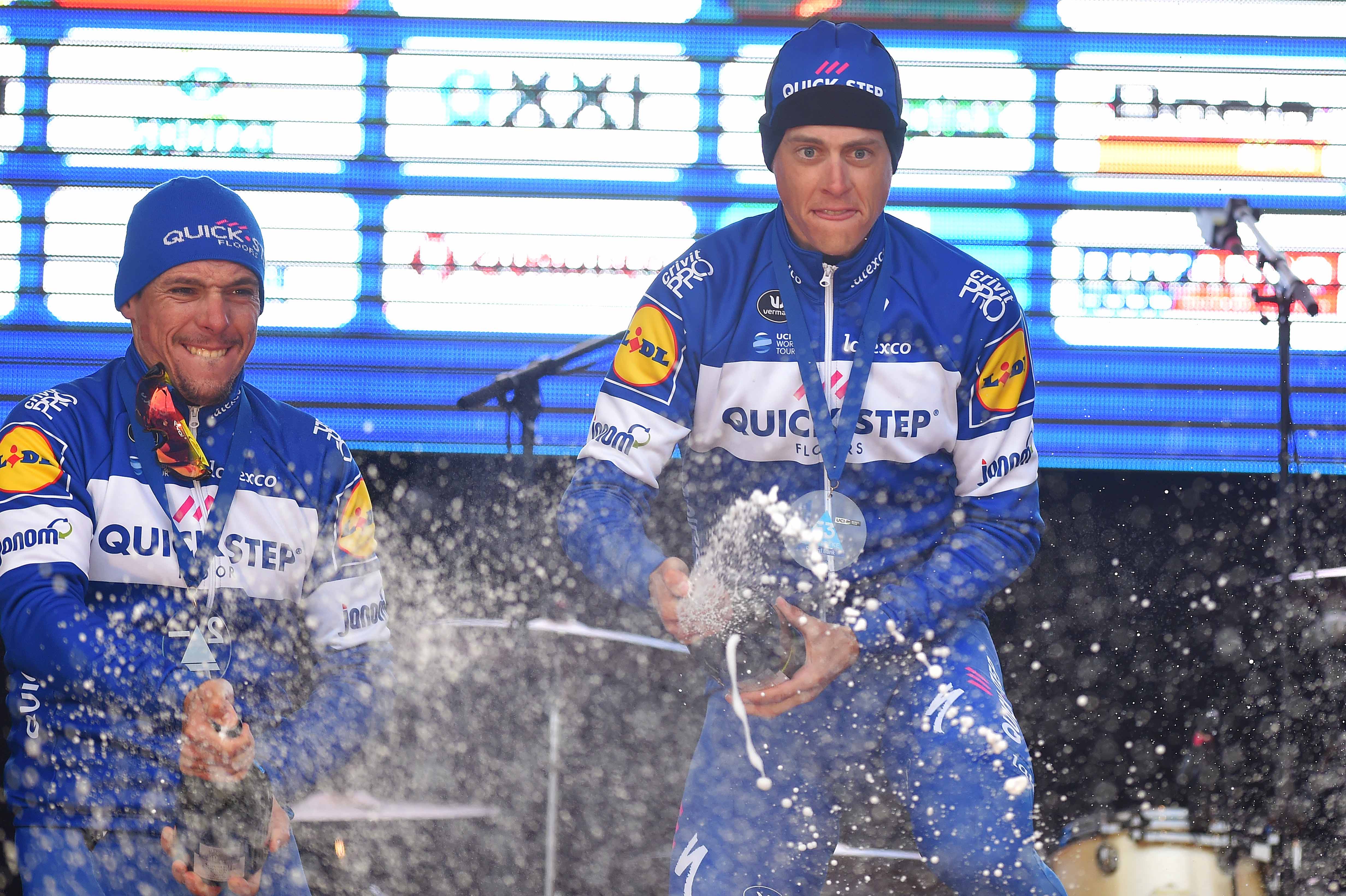 As he crossed the line, 33-year-old Terpstra pointed to the team’s name, a gesture mirroring the one of Elia Viviani in Driedaagse Brugge – De Panne two days ago, and which he explained before mounting to the podium: “I am very grateful to our sponsors, they’ve been by our side for so many years now and thanks to them we are here today. To repay them with a victory on such a big race made me very glad. Let’s hope we’ll keep the momentum and add many other great results to our palmares this spring.”