The Luxembourg Champion attacked in the last 20 kilometers and scored the first ever victory of Quick-Step Floors in “La Doyenne”.

Since the team’s inception in 2003, Quick-Step Floors have won a staggering 17 Monuments, most recent major classic to make its entry on this unbelievable roll of achievements being Liège–Bastogne–Liège, a race which our squad had come close to winning several times in the past. Created in 1892, the Belgian Classic is the oldest Monument on the calendar and one of the most prestigious races in the world, won in the past by the likes of Ferdi Kübler, Rik Van Looy, Eddy Merckx or Bernard Hinault.

As of Sunday, Bob Jungels has joined all these illustrious names after attacking over the top of Côte de la Roche-aux-Faucons, the race’s penultimate hill, with 20 kilometers to go, and holding off a strong chasing group over the iconic Côte de Saint-Nicolas – “The Italian Climb” – and the uphill drag to the finish in the suburb of Ans.

“To be honest, this came as a surprise. I didn’t believe I could pull it off until I saw that nobody was behind me as I was approaching the finish line. Yesterday evening I watched together with Julian the 2011 edition, when the winning move was made on Roche-aux-Faucons, and I made my attack in the same place. I was waiting for this victory for a long time and to finally get it is pretty unreal”, said Bob, the 12th different Quick-Step Floors rider to taste success this year.

Quick-Step Floors – who on Sunday broke the record for the most victories in one-day races on Belgian soil, with 11 wins – helped the peloton keep the nine escapees on a leash from the start of the 258.5km-long race, before moving with the whole team at the front ahead of the iconic Côte de La Redoute, a hill which made its debut on the course in 1975, when Eddy Merckx took his last win.

Enric Mas and Pieter Serry set a fierce tempo and made others suffer, pre-empting any attacks and chewing into the escapees’ lead, who were left with only a minute in hand after the brutal climb. Our team continued to drive the peloton, and on Côte de Roche-aux-Faucons, just as the gradient hit 12%, Philippe Gilbert launched an attacked which forced a response from the bunch that was rapidly morphing into a select group.

The move was nullified 500 meters from the top, but our squad continued to be prominent, this time with Bob Jungels, who accelerated before the end of the climb and sensing on the descent that he had opened a gap on the chasers, went into time trial mode and established a 50-second lead which proved more than enough despite a plethora of attacks launched from the first chasing group, that included also Julian Alaphilippe, the Flèche Wallonne victor, who brought to heel most of these actions. 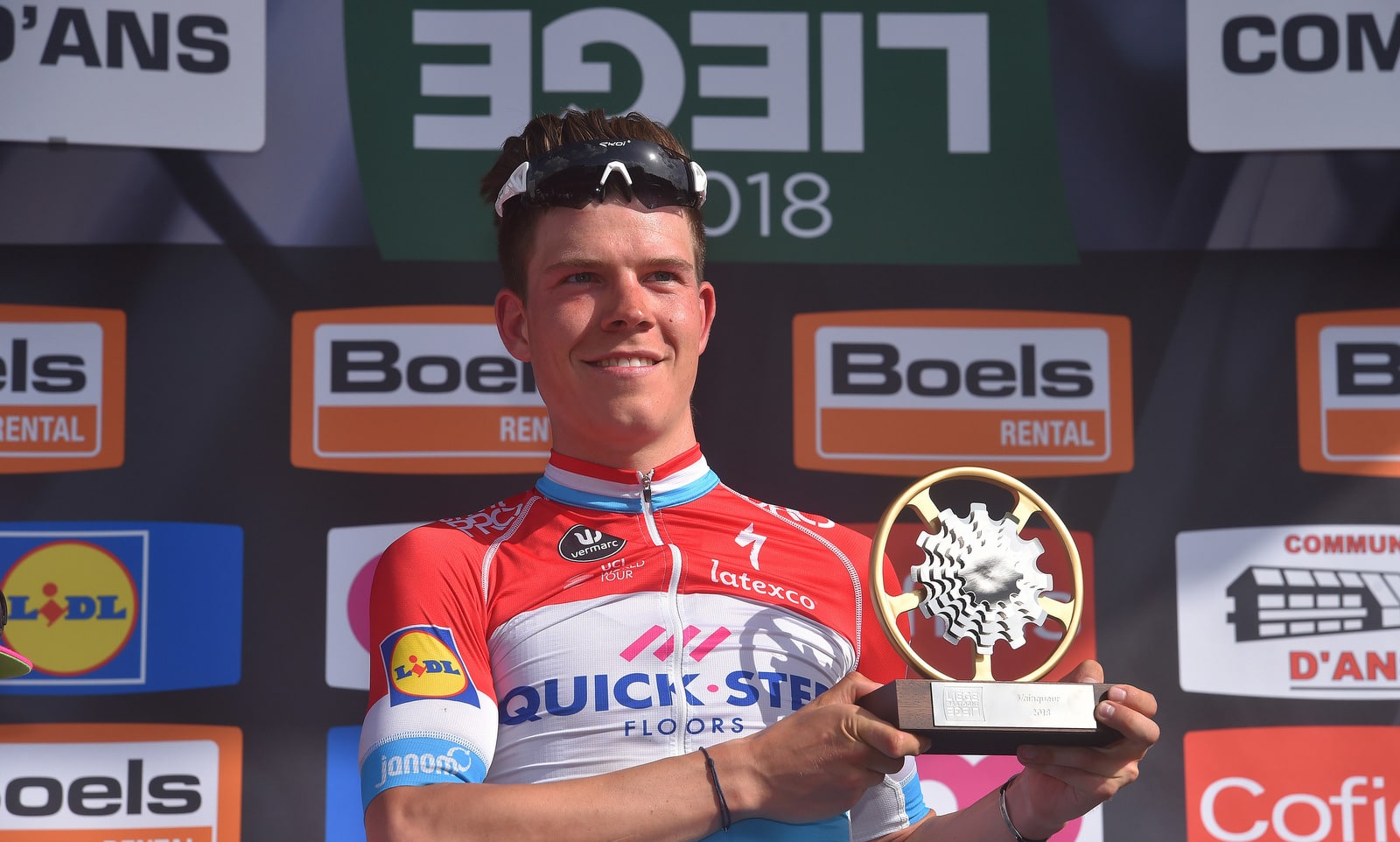 Jungels’ stunning solo effort was rewarded with the biggest win of his career, as the 25-year-old crossed the finish line arms aloft, punching the air, and with no one else in the picture, becoming the second Luxembourger in history to win Liège–Bastogne–Liège with the national champion jersey on his shoulder, after Marcel Ernzer, in 1954.

More than half a minute behind – the biggest gap between first and second since 2009 – Michael Woods (EF Education First) and Romain Bardet (AG2R) rounded out the podium, while teammate Julian Alaphilippe still had enough energy left to sprint for fourth and point to his Quick-Step Floors jersey, thus bringing to conclusion a remarkable Ardennes Classics campaign.

“We made the race hard from La Redoute, where we put the hammer down, before attacking with Phillipe on Roche-aux-Faucons. Then I made a move and seeing there was a small gap, I decided to use my rouleur abilities all the way to the finish, while at the same time carefully dosing my effort”, Bob said, before explaining what this win means for him. “This is the most beautiful one-day race in the world, and to get the victory here, close to Luxembourg and in front of my family and fans, who all came to support me, it’s something I will always remember. To be sincere, it’s pretty unbelievable and I’ll need a few days to let everything sink in.” 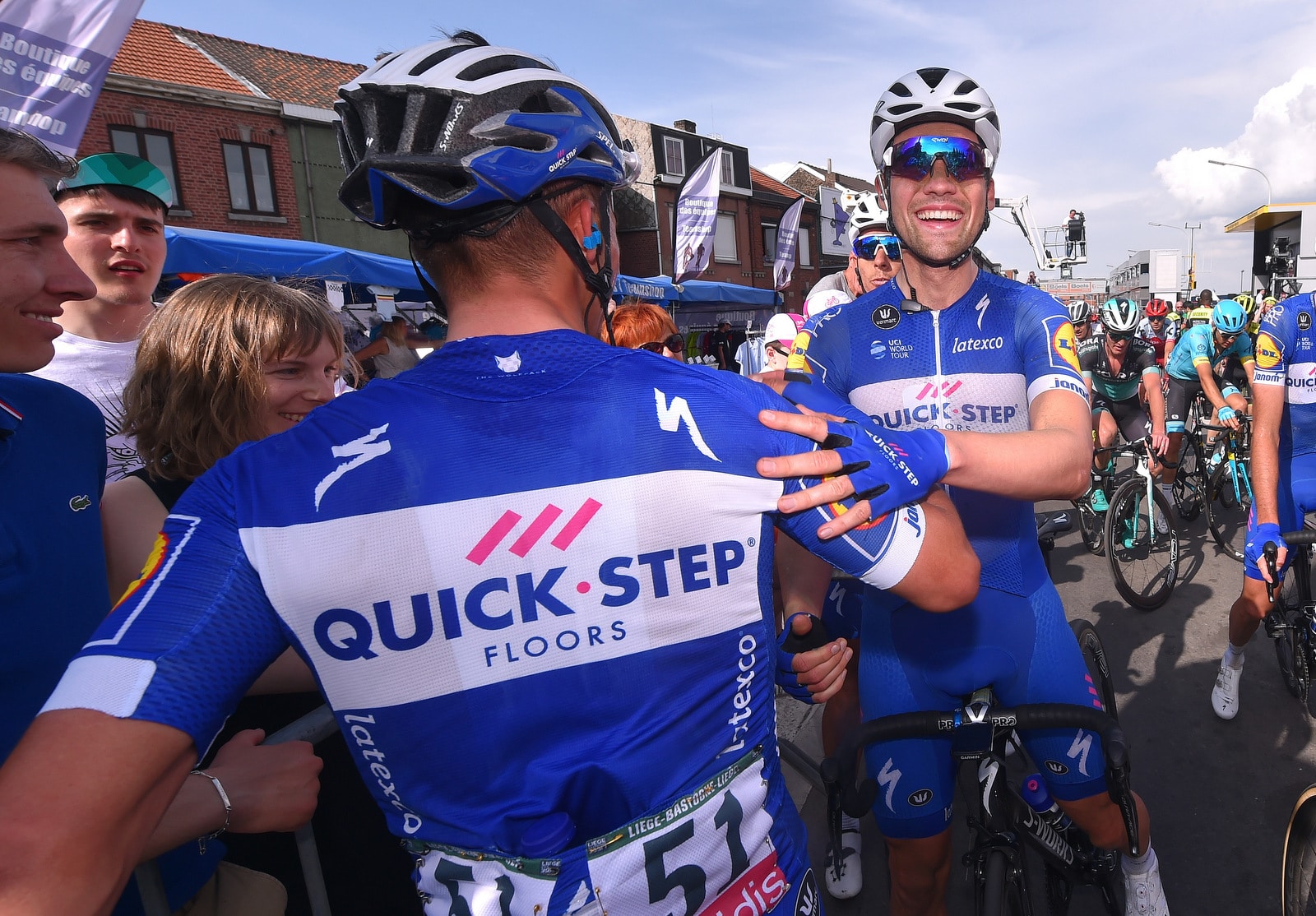 After capping off what has been a stellar Classics campaign for Quick-Step Floors, Bob underlined the team’s strength and unity, two factors which played a major role this spring in our success: “We are more than a team.”

Quick-Step Floors is a family, we trust each other and everybody knows his own role and more importantly, gets a chance on the team, as we could see in many of this season’s races

“We are always there for each other, fighting until the very end, and that is just one of the things that make this team great.”

Quick-Step Floors increased the lead at the top of the World Tour team standings after “La Doyenne”, having almost 3000 points over the second-placed squad in the classification. At the same time, our outfit is well-represented in the individual standings, where Niki Terpstra, Julian Alaphilippe and Philippe Gilbert are all in the top 10.