The 29-year-old cemented his position as the best sprinter of 2018, notching up his seventh win in the Quick-Step Floors jersey.

Elia Viviani was a man on a mission on Saturday afternoon, and supported by a strong Quick-Step Floors train, he didn’t disappoint, laying down an early marker in the fight for the points classification and sailing to a convincing victory in Tel Aviv, where he became the first ever rider to take a Giro d’Italia stage on disc brakes.

“It wasn’t easy to win today. I am usually very calm, but coming here after an excellent start to the season there was some pressure on me and I was a bit nervous, especially as many were tipping me as the main favourite in the bunch sprints. This victory is for Elena, my girlfriend; she knows how many sacrifices I have to do and is always supporting me, which means a lot”, a relieved Elia confessed after his first Giro d’Italia stage victory since 2015.

The day rolled out from Haifa with Maximilian Schachmann in the white jersey and traveled over 167 kilometers, a flat parcours which featured a small fourth-category climb whose sole purpose was to see the blue jersey being awarded at the end of the day. After a frantic start, Lars Bak (Lotto-FixAll), Davide Ballerini (Androni-Sidermec) and Guillaume Bovin (Israel Cycling Academy) established a 3:30-lead, but by the time they arrived at the bottom of the ascent that advantage was gone and Enrico Barbin (Bardiani-CSF) crossed the top first. 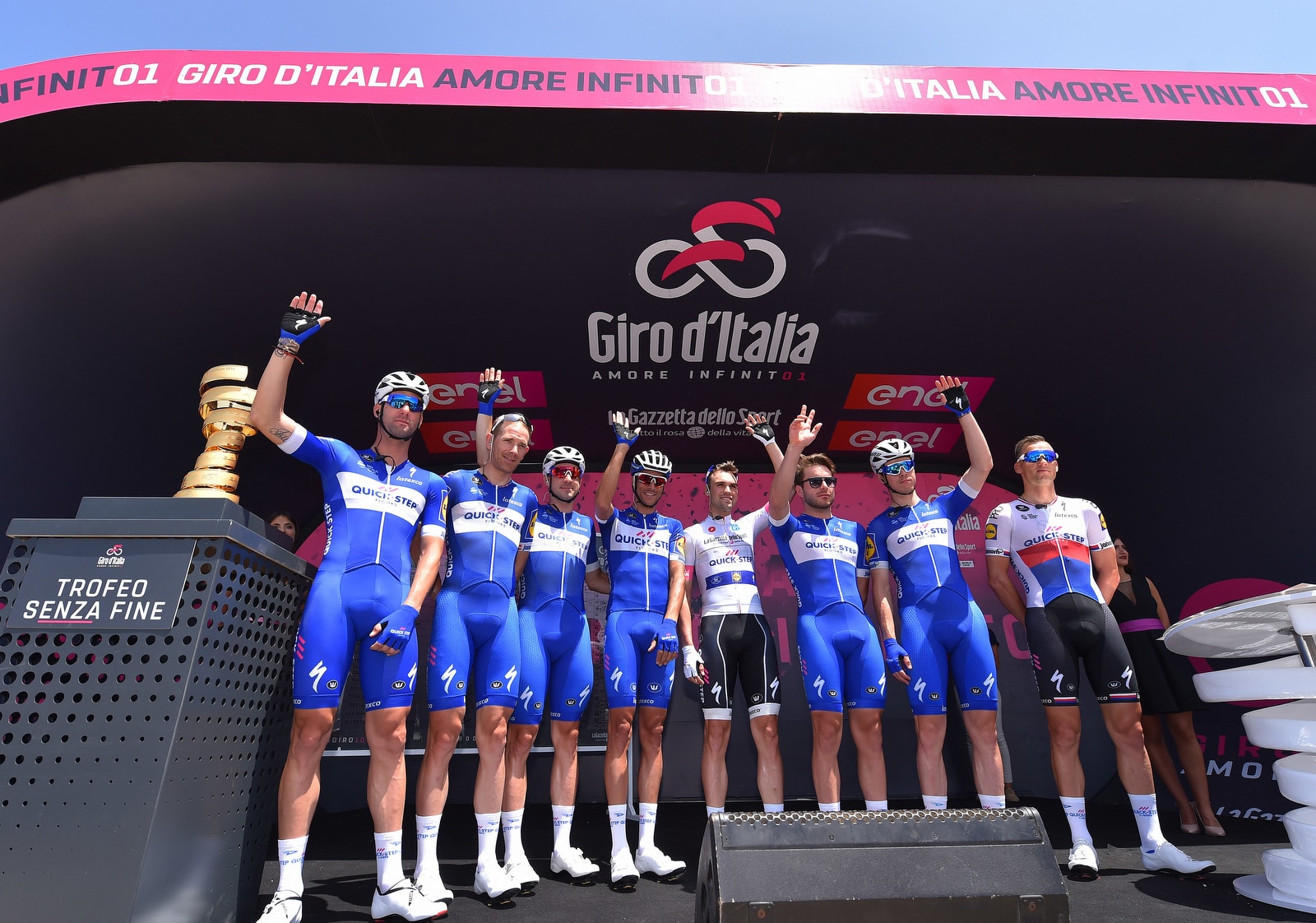 Things calmed down for a few kilometers, before tension began to build up again ahead of the second intermediate sprint, where Elia Viviani grabbed more vital points after the ones scored earlier on the stage at the first intermediate. Immediately, the bunch slowed down, and that was the cue for Victor Campanaerts (Lotto-FixAll) to jump from the field, but his move was a short-lived one.

With more than 40 kilometers left, Boivin attacked again and put one minute and a half between him and the pack, prompting a reaction from Grand Tour debutant Rémi Cavagna, who took over the front of the bunch and began chewing into his advantage. The catch was made with ten kilometers to go, and just as the teams began fighting for position, some riders decided to attack and see if they could foil the sprinters’ plans. That didn’t happen, but their actions made for a hectic and chaotic finish, leaving every rider on their own.

Well-positioned after his teammates’ fine job, Elia Viviani jumped on the wheel of Jakub Mareczko (Wilier Triestina), before displaying his track pedigree and rounding his countryman, thus opening an unassailable lead, which landed the 29-year-old the seventh victory since the start of the season. 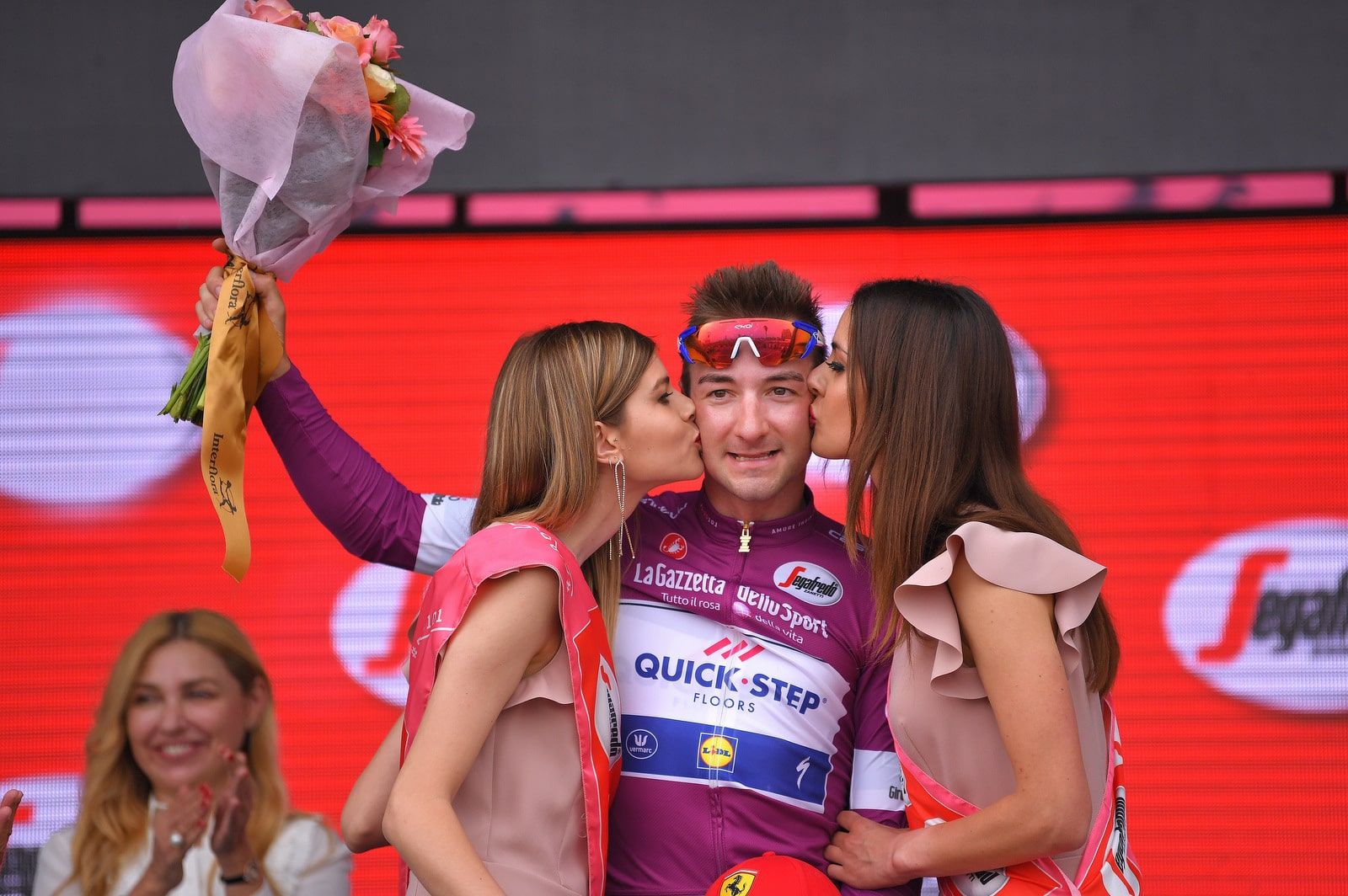 “The guys did a really amazing job and I want to say a big thanks for that! Rémi took the responsibility on his shoulders and closed the breakaway, Styby brought us to the front, then Florian took over with two kilometers to go, before Michael and Saba dropped me in the closing kilometer. It was chaotic because of all those corners and roundabouts, but we can be proud of ourselves”, explained Elia, the 29th different rider to win a Grand Tour stage for Quick-Step Floors since the team’s inception.

Saturday’s victory and the points he gained at the two intermediate sprints propelled the Italian at the top of the cyclamen classification, making him the second Quick-Step Floors rider to wear a distinctive jersey at the Corsa Rosa, where Maximilian Schachmann continues to lead the youth rankings.

“The cyclamen jersey is a historic and prestigious one, and winning it is a dream of mine. The road to Rome is long and hard, but we will try to defend it and get more points. The team is strong and believes in mine, and I am ready to repay them for their confidence and fight for more wins, because these will increase my chances of taking home the cyclamen jersey.”